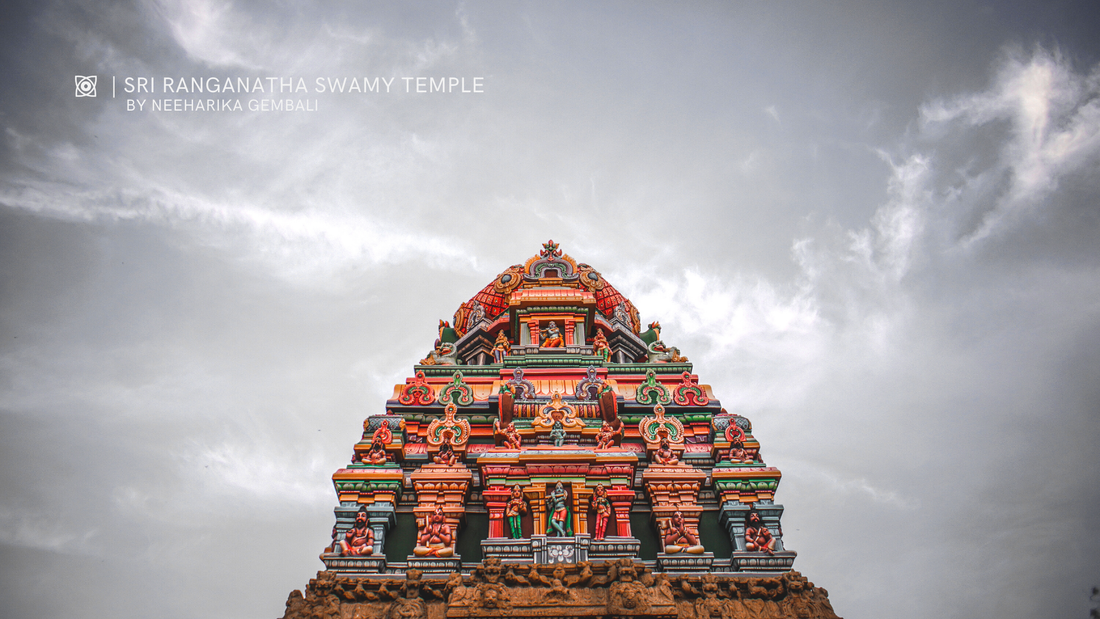 Cover Photo by Pankaj Tottada
‘Thiruvarangam’ is a temple located in Srirangam dedicated to Ranganatha Swamy, a reclining form of Lord Vishnu. It is one amongst the few illustrious temples in South India, dating back to the Sangam era [i], according to the Tamil Literature [1], and is mentioned in the epic Silappadikaram by Ilango Adigal [2].
​
Constructed in the Dravidian style of architecture, Thiruvarangam is one of eight self-manifested shrines of Lord Vishnu and one of the most important 108 main Vishnu temples. Known by several names such as Thiruvaranga Tirupati, Bhoologa Vaikundam, Periyakoil, Bhogamandabam, Thiruvarangam is the first among the Divya Desams [ii][3] alongside following the Thenkalai [iii] tradition of worship.

According to Divya Prabandha, a collection of 4,000 Tamil verses by twelve Alvars [iv]. There are entirely 108 Vaishnava Divya Desams [4]. Out of them, 105 are located in India, one is in Nepal, and the last two are believed to be outside the Earthly realms.

This first Divya Desam is massive in scale and is spread across 156 acres [5]. It is even the largest functioning temple in the world and is ranked amongst Angkor Wat in Cambodia & Borobudur in Indonesia [6]. Though Angkor Archaeological Park spreads over 40,000 hectares, unlike Sri Ranganatha Swamy Temple, the deity isn’t offered prayers anymore.

Another unique element for Sri Ranganatha Swamy Temple is that around its main shrine, there are seven concentric rectangular enclosures formed by thick rampart walls. Within these enclosures, the inner five enclosures of the complex constitute the temple monuments and shrines, and the outer two enclosures function as the settlement comprising living and commercial areas. These seven rectangular enclosures are called Sapta-Prakaram and these make the temple more of a temple-town than just a temple [7]. Thus, the distinction between the temple and the settlement gets blurred and the temple is often referred to as ‘Srirangam’ [8].

However, Sri Ranganatha Swamy Temple isn’t the only temple with these enclosures. Meenakshi Temple dedicated to Goddess Parvati in Madurai has four prakarams followed by four concentric rings of settlement. Similarly, Nataraja Temple dedicated to God Shiva in Chidambaram has five prakarams followed by a few concentric rings of settlements [9]. A slight difference is that Madurai and Chidambaram are examples of settlements around a temple while Srirangam has settlements within the temple. It is even considered as the best enclosure based temple-town in Tamil Nadu or arguably the entire world.​

Cover Photo by Pankaj Tottada
Srirangam is also known as the “Temple Island” and the temple complex alone stretches over 156 acres with a perimeter of 4,116 meters. The tremendous site of this gigantic piece of architecture is situated on the island of Srirangam, that is bounded by the Kaveri River and Kollidam River (a tributary of Kaveri).
​
Covered by rivers on either sides, Srirangam’s Ranganatha Swamy temple has the Sapta-Prakaram design which encompasses the sanctum, gopuram, shrines, pavilions, mandapas, water harvesting systems via temple tanks, and other services with some residential and commercial locations. It has over twenty-one magnificent towers inside all prakaras and the main entrance known as Rajagopuram or the Royal Temple Tower is seventy-three meters high and moves up in eleven progressively smaller tiers.

Apart from these seven enclosures which spread 129 kilometers and 170 kilometers approximately in the longitudinal and latitudinal axis, rampart walls were added during the medieval times after a few invasions. In these enclosures, the shrines and monuments are located within five enclosures and the last two enclosures have the commercial areas, living areas and other infrastructures. The numerous gopurams or magnificient towers connect the Sapta-Prakaram enclosures allowing the pilgrims to reach the sanctum from multiple directions [10].

Apart from the seven prakarams with massive walls, the temple complex has 21 very colourful sculpted gopurams (consecrated gateways with towers), 50 sub shrines, 9 sacred pools, gilded Vimana (dome) over the sanctum sanctorum of the presiding deity, and other interesting features such as fresco paintings. The temple is the nucleus and the life of people is centred around it. 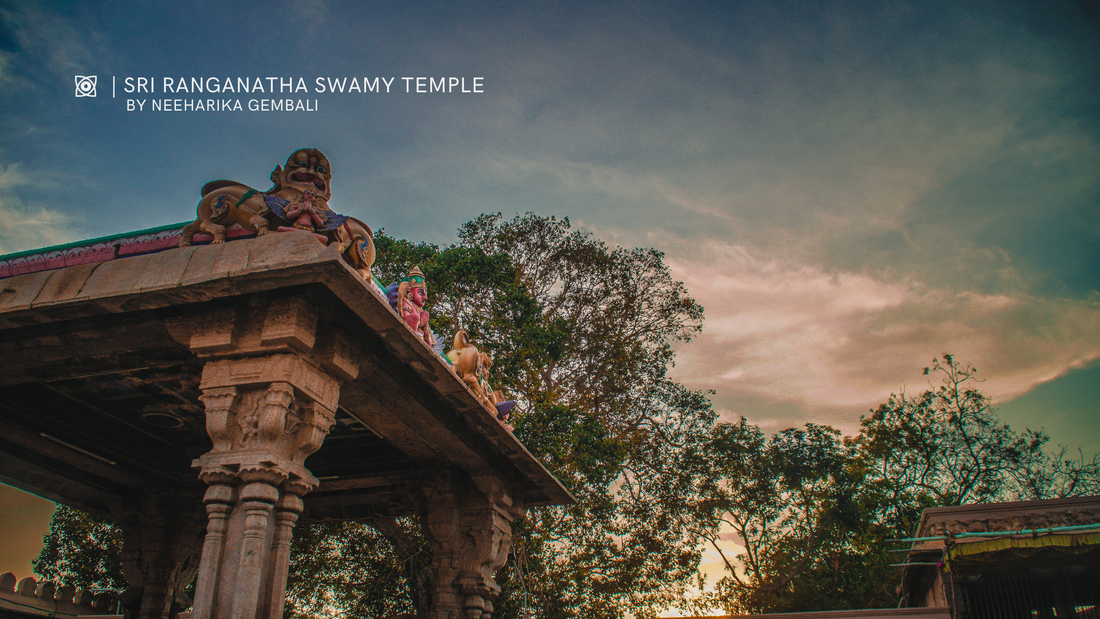 Cover Photo by Pankaj Tottada
Swamy Ranganatha Temple is not only referred to in the ancient Tamil literature of the Sangam era but is also mentioned through stone inscriptions belonging to the Chola, Pandya, Hoysala and Vijayanagar dynasties who ruled over the region. These inscriptions range between the 9th and 16th centuries and tell various stories about the temple.

It is said that Lord Brahma worshipped Lord Vishnu for a long time and in his absence, he appointed God Surya or the Sun God to continue the tradition.

Since then the Sun clan has been worshipping Lord Vishnu and in Treta yuga, Sri Ram who also belonged to the Sun clan worshipped the deity. After he defeated Ravana, Lord Rama in recognition for his loyalty and services presented the idol of the Lord Ranganathar to Vibishana.

On his way back to Lanka, Vibishana placed the idol down to rest and when he tried to lift it up again the idol did not budge. Considering that Lord Ranganathar expressed his desire to stay near the Cauvery river, the idol was left there as it faced south towards Lanka [11].

In 1311, Alauddin Khilji’s general Malik Kafur’s forces of the Delhi Sultanate raided a “Golden Temple” on river “Kanobari” i.e. Kaveri as stated in Arabic texts during that period. They even destroyed the temple and plundered the golden icon of the deity to Delhi. According to Steven P. Hopkins, this is believed to be the Ranganatha Swamy Temple.​

Though there are various inconsistencies in the Tamil texts as to how the temple regained the shrine, one text in Koil Olugu [v] informs that a young girl had vowed to fast till she had seen the icon. She followed the Muslim army as it returned with the loot back to Delhi. Sneaking into the palace, she noticed that the Sultan’s daughter had fallen in love with the image. The young girl returned to Srirangam and told the priests about what she had seen in Delhi. The priests went to Delhi with musicians to find the shrine in playful possession of Sultan’s daughter. They sang and danced before the Sultan while pleading him to return the shrine. Accepting the request, the Sultan returned the Shrine. However, since his decision upset his daughter, the Sultan sent his army again to Srirangam to bring the idol, but this time they were not successful.​

In 1323 AD, there were more invasions. Intending to secure the shrine, a group led by the Vaishnavite Acharaya Pillai Lokacharya preemptively moved the shrine to Tirunelveli in Tamil Nadu before the Delhi Sultanate troops reached Srirangam. Alongside Lord Vishnu’s shrine, Goddess Ranganayaki or Goddess Lakshmi’s shrine was also moved to another location by a separate group and the temple was then defended. According to the Tamil texts, around 13,000 devotees died in the fierce battle.

After nearly six decades, the Vijayanagara Empire ousted the Madurai Sultanate in 1378 and the image of Namperumal [vi] was brought back to Srirangam. Before then, for decades the deity and the priestly wardens wandered and secretly carried the temple’s icon through villages of Tamil Nadu, Kerala and Karnataka. They finally went to the hills of Tirumala Tirupati, where they remained until the Ranganatha Swamy temple was rebuilt in 1371.

When the icon was consecrated again, according to the legends, this time, in the memory of the first Sultan’s daughter, a niche [vii] was built in the temple for her in a tradition called Thulukha Nachiyar [viii]. The niche shows her as a girl sitting on a horse that carried her to Delhi and her legend is still remembered. Even today, a painting of “Surathani” [ix] also known as Thulukha Nachiyar in Tamil can be seen in her shrine near the Arjuna Mandapa adjacent to the sanctum.

During the contemporary processions, when the icon is taken out of sanctum and then returned after its journey, Thulukha Nachiyar is dressed in Muslim garments and food such as butter and chappathis are offered to her.​

Sri Ranganatha Swamy temple’s artwork is the subject of numerous different Tamil legends and is covered in regional Puranic texts. Sriranga Mahathmiyam, for example, is one of the compilations of the temple.

According to it, Brahma the Creator was performing austerities during the Samudra Manthan or the churning of the cosmic ocean and Srirangam Vimanam emerged as a result. It remained in Satyaloka for ages and was brought to Ayodhya by King Ikshvaku.

So he gave it to King Dharma Varma who ruled over the island and King Dharma consecrated the Vimanam to face the south cardinal direction eternally thereby blessing Vibhishana and Lanka. Hence, the deity which in a reclining posture faces South and the idol body is aligned to the east-west axis.

6. LEGEND OF THE FOUR SAGES

As per another legend, Sanaka, the four child sages, came for a darshana of Ranganatha in Srirangam. They were stopped by Jaya and Vijaya, the guardians of Vaikuntha. In spite of their pleadings, they were refused entry. In anger, all four of them cursed the guardians in one voice and left.

The guardians approached Vishnu and told him about the curse. Ranganatha said that he would not be able to revert the curse and gave them two options. The first one being that they were to be born as demons opposing Vishnu for three lifetimes or be born as good human beings in seven lifetimes.

​Not wanting to be separated from their lord for seven lifetimes, the guardians accepted to be born as demons for three lifetimes and were believed to have taken the form of Hiranyaksha & Hiranyakasipu, Ravana & Kumbakarna and Sisupala & Dantavakra. Lord Vishnu on the other hand took four avatars – Varaha, Narasimha, Rama, and Krishna respectively to kill the demons in each one of those births. 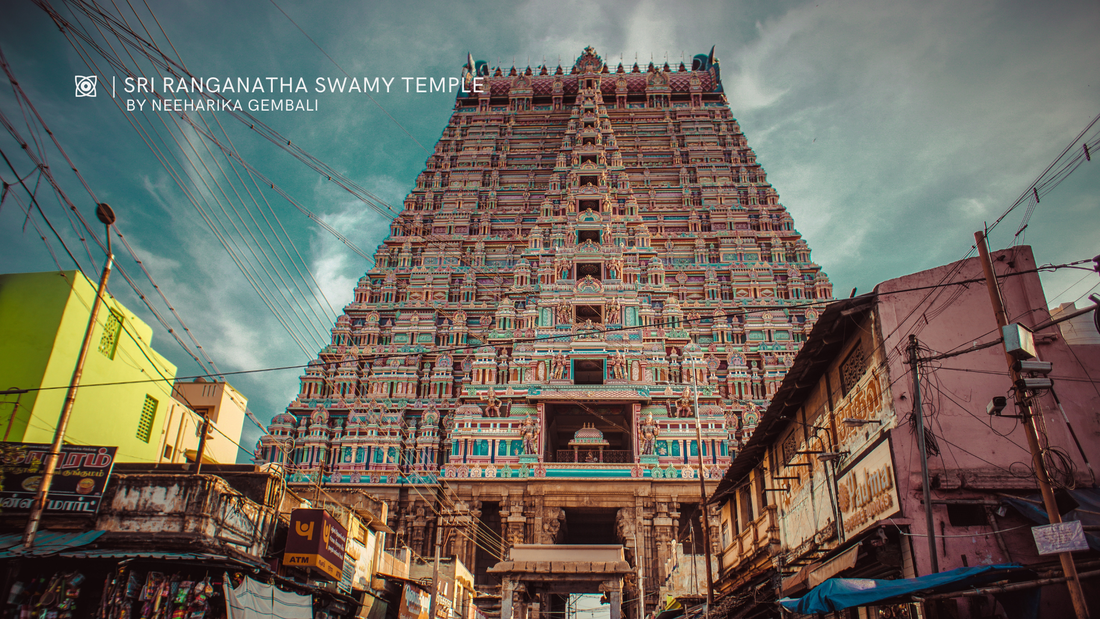 Cover Photo by Pankaj Tottada
For a temple as old as Sri Ranganatha Swamy temple, there would certainly be a lot of unique features. A few of them are:
​

Under the Vijayanagara Empire, the temple site saw over 200 years of stability, repairs, first round of fortifications and addition of mandapas. The Vishnu and Lakshmi images were reinstalled and the site became a Hindu temple again in 1371 CE under Kumara Kampana, a Vijayanagara commander and the son of Bukka Raya I.
​
In the last decade of the 14th century, a pillared antechamber [x] was gifted by the Vijayanagara rulers. In the 15th century, they coated the apsidal roofs with solid gold sheets, followed by financing the addition of a series of new shrines, mandapas and gopuras to the temple, according to George Michell.
The temple has witnessed and played a key role in the early Sri Vaishnavism history, particularly the centuries that followed the major Hindu philosopher Ramanuja (1017–1137 AD), and his predecessors Nathamuni and Yamunacharya. It witnessed the debate between the Dvaita (dualistic) and Advaita (non-dualistic) sub-traditions within Vaishnavism. Centuries later, it was a key site in the debate and disagreements between the northern Tamil and southern Tamil traditions, also called as the Vadakalai and Thenkalai. The early rulers such as the Pallavas, Cholas and Pandyas supported it as a hub of the Bhakti movement with a devotional singing and dance tradition, but this tradition stopped during the 14th century and was revived in a limited way, much later.

In modern times, Sri Ranganathaswamy temple has won the UNESCO Asia-Pacific award for cultural heritage conservation programme in the Awards of Merit category. It is the first temple from Tamil Nadu to grab the prestigious honour from the UN body. The traditional method of renovating temple premises as well as re-establishment of rainwater harvesting and historic drainage system in preventing flooding were two key parameters that earned the temple the award.